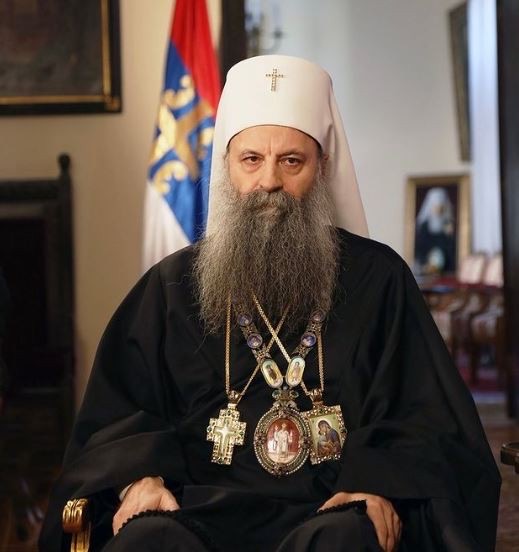 The Serbian Orthodox Diocese of Austria-Switzerland, with its headquarters office in Vienna, where numerous international political and humanitarian organizations from Europe and worldwide are based, strongly condemns the decision of provisional authorities in Priština to forbid His Holiness the Patriarch of Serbia Porfirije, from entering Kosovo and Metohija to visit the centuries old seat of Serbian Orthodox Church in the Patriarchate of Peć on the eve of the Christmas holidays.

At the administrative checkpoint, the car of His Holiness the Patriarch was separated from the rest of othervaiting vehicles, and His Holines and therest of the delegation were told „to wait.“ After 45 minute holdup, His Holiness the Patriarch was told that He is not allowed to enter Kosovo and Metohija, to stay in His home in the Patriarchate of Peć, where the ancient seat of the Serbian Patriarchs is located. Such decission from the Kosovo* authorities is a violation of the law and as such this act it is intolerable!

At this point of time, we call on all relevant international institutions to react to this unacceptable act, which not only grossly violates the laws and human rights of all believers and the head of the Serbian Orthodox Church, but it also artificially causes an additional tensions and divisions in an already unstable situation.

It must be known to Kosovo* temporary institutions and, to the international community, that the Monastery of the Patriarchate of Peć was, is and always will be, the main holy seat of the Serbian Orthodox Church and the pivot of the entire Orthodox Serbian spiritual heritage. Every visit of the Serbian Patriarch to this Monastery represents a homecoming, which no one shall ever deny it.

The mission of His Holiness the Patriarch of Serbia Porfirije is always motivated by reconciliation and inspired by the words of the Holy Apostle Luke: whatever house you enter, first say: Peace be to this house! (Lk 10, 5). Therefore, we pray to Christ our God, to reason up and to enlighten all relevant authorities of so-called Kosovo* and international institutions placed in the southern Serbian province, precisely with the aim of reconciliation and achieving the lasting peace. May His Holiness the Serbian Patriarch Porfirije, immediately be permitted to enter the territory of Kosovo and Metohija and by doing so to enable the members of the Orthodox Church to meet their spiritual father at the dawn of this great and approaching the Christian feast of the Nativity of our Lord and Saviour Jesus Christ.

His Holiness the Patriarch, who according to the regular program was supposed to arrive at the centuries old seat of the Serbian Church, announced that He does not give up in his intention to attend services in the Patriarchate of Peć and celebrate.

The Serbian Orthodox Diocese of Austria-Switzerland appeals to factors, which have real influence in Kosovo and Metohija, to stop such unreasonable violations of the basic human rights and freedoms. May nobody ever be allowed or become encouraged, by this provocation, for further threatening the Serbian people and their sanctuaries.